Nations don’t trade. Metaphors can both clarify and deceive. Trade is no exception. The current commentary on trade relationships between nations has elevated the commercial profit-loss mechanisms of international trade to an abstract state level apparatus. When we say states trade what we really mean is the firms in different states have commercial relationships. Firms have a singular motive: to make profit. Similarly to making the individual-firm distinction, we must always remember to make the state-firm distinction. This distinction is further amplified when we are discussing large economy states. They too have a singular motive: geopolitical dominance.

The persistent US trade deficit with China implies that US consumers are able to buy cheaper goods from China. But it is also a signal of the erosion of the US global geopolitical dominance caused by economic decline. In the US economy financial goods are replacing physical goods. The chart below shows the increase in the financial component of US GDP relative to manufacturing. 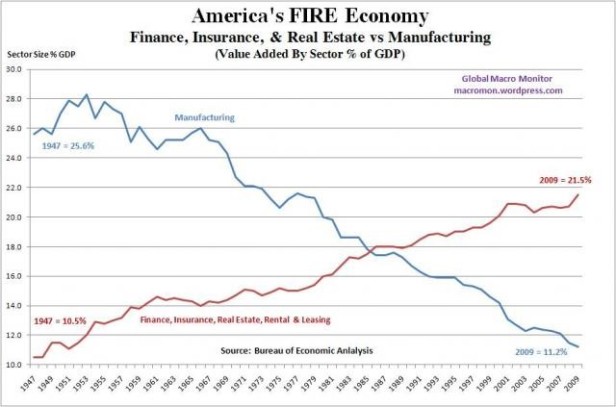 Stock market capitalization of the US relative to GDP is 153%. For China it is 65% and Germany 54%. I am familiar with arguments that claim this is not problematic because countries trust the US markets most.

The 2008 financial crisis gave a glimpse of what could happen to the US economy if the financial sector collapsed.

The US government was barely able to patch up the financial markets by using excessive money creation and debt redistribution (i.e quantitative easing) in 2008. This was a necessary move but it means the Federal Reserve System balance sheet is now bloated. In another crisis, quantitative easing will likely not be effective. At that point, the money and capital markets of the US will no longer be as attractive in the long term, resulting in the dollar losing its global reserve currency status. At this point, the geopolitical dominance of US will weaken. And the main adversary (which is now China) will strive to make sure the US remains in a weakened position.

Very few people seem to understand this. But the Communist Party of China (CCP) understands. In 1999, two colonels of the People’s Liberation Army published Unrestricted Warfare[1]. The book gave strategies for defeating the USA without direct conventional military engagement. One of the core strategies was the use economic policies to eat away at the US economy. Having China being the core manufacturing hub of the world was one such strategy. This was made explicit with the ‘Made in China 2025’ policy recently launched by the CCP[2].

China did not achieve its spectacular growth through free trade. All of China’s trade is managed by the CCP. When discussing the USA-China trade relationship we must always acknowledge that China has an authoritarian government that will create and implement policies that they believe will benefit China irrespective of what the Chinese citizens think or what multilateral organizations demand. When China ascended to the WTO in 2001 it was naively expected that China would conform to the rules of that organization. Authoritarian governments, however, do not follow neoliberal rules.

Starting around 1978 under Deng Xiaoping, the CCP began their reforms from Soviet style system wide planning to state capitalism directed by large and powerful state owned enterprises (SOEs)[3]. Although China ascended to the WTO in 2001, this model never changed. On the Fortune 500 list of largest global companies, China comes in a close second (120) behind the US (126). Japan (52) is quite far behind. But what is shocking is that 93% of the Chinese firms on the list are SOEs. The CCP heavily subsidies their SOEs, and creates rules specifically favorable to them; to the detriment of foreign entities.

The USTR Section 301 report identified several instances where China has violated the WTO rules to which it signed in 2001. These concern trading rights, import regulations, export regulations, intellectual property rights, technology transfer, foreign investment, and so on[4]. The US has complained to the WTO about China on 22 occasions and China has still persisted in violating the rules. The White House Office of Trade and Manufacturing report goes on the dissect the persistent economic aggressions of China[5].

What choice does the US have if it is not able to deal with China through WTO processes? Multilateral processes only work if everyone agrees to adhere to the same rules. Of course , though, these rules were largely set by the US. In dealing with China, the WTO is absolutely ineffective. There is no democratic fallout if China refuses to acknowledge multilateral rules (as seen explicitly in China’s absolute refusal to acknowledge the Philippine’s win in the Hague in matter of the West Philippines Sea/South China Sea). It is likely that any strong ruling in the WTO against China will similarly fall on deaf ears. (Similarly the US has substantially disregarded a WTO ruling after losing a case to Antigua).

In any case, it has gotten to a point where countries cannot simply halt or significantly decrease trade with China in the form of sanctions. The US, then, is forced to use geoeconomics – the use of economic instruments to further geopolitical goals.

As the President of the United States, Trump is right to engage China directly. His strategy is clever: robe a geostrategic containment engagement in bland terms of trade rhetoric. And this is by no means outside the modus operandi of the US. During the Cold War period the US actively practised a strategy of containment against the Soviet Union. In fact, China has accused the US of trying to economically contain China[6]. But of course, China has been engaging in geoeconomics as well recently.

For example, in 2012 China allowed farmers from the Phillipines to export their bananas to China but when the bananas arrived they were left to rot on the dock. This left the Philippines banana planters with neither stock nor payment (30% of Philippines banana exports go to China). This was used as a tactic to weaken the Philippines position when the tensions over the South China Sea were rising[7]. Another example is when China blocked rare earth metals to Japan almost crippling Japanese tech manufacturing, until Japan finally conceded, over another maritime dispute[8]. In both cases, the WTO was impotent.

What Trump gets wrong is that tariffs are not sufficient. And he failed to properly define a long term strategy to deal with China. Without such a strategy the US will continue ad hoc aggressions.

China has been shown to disregard all multilateral rules if it wants to. But even so, it is difficult being upset with China. China has succeeded in the most comprehensive and rapid poverty alleviation program in all of human history. China was able to lift over 600 million people out of poverty in less than 30 years[9]. Following along this path, it should be expected that the CCP is mounting a restoration of China to compensate for its decline after the late 1850s: the “century of humiliation[10]”. Few commentators remember that for 18 of the last 20 centuries China commanded a greater share of world GDP that any other country. Henry Kissinger reminds us that as recent as 1820 China “produced over 30% of world GDP – an amount exceeding the GDP of Western Europe, Eastern Europe, and the United States combines.”[11]

Wang Yi, however, recently attempted to assure the UN that China has no ambition of hegemonic dominance[12]. I believe that is an empty statement given Xi Jinping’s expansive Belt and Road Initiative (BRI) which has been added to the Party constitution of the CCP[13]. From the perspective of CCP, as Lee Kuan Yew frames it, China is not looking to become dominant; rather, it is looking to restore dominance. It is a different geopolitical mindset.

This to me is the crux of the Sino-American challenge. The US is right that China is not properly following WTO rules because it has disregarded many of those rules to accelerate its economic growth. And it has been exceedingly effective. But if China were to conform to the WTO rules, it would not match the model that has been so successful.

Multilateral trade rules were not designed by China to fit China’s model (authoritarian government, state capitalism). They were primarily designed by liberal democracies – the US in particular. Both of these nations have fundamentally different economic models and justifiable geopolitical reasons for disregarding WTO rules to protect (or increase) their geopolitical dominance.

We are living in a time of multilateralism. But this time is anomalous. Dani Rodrik has explained in detail why “free trade agreements” have little to do with free trade[14]. Those agreements are primarily political documents. In fact, “76 percent of existing preferential trade agreements covered at least some aspect of investment (such as free capital mobility) by 2011; 61 percent covered intellectual property rights protection; and 46 percent covered environmental regulations”[15]. These are political documents that attempt to alter a nation’s domestic policies with the preferences of international actors.

This is not possible with a powerful authoritarian government. It is a grave error to treat China as just another Western country; like how you would treat Japan. China is an ideological adversary to the US that has now become an economic adversary. When at odds with geopolitical motives multilateralism always fails. Geoeconomic escalation is not only justified but it is inevitable.

Rasheed Griffith’s professional interests include Southeast Asian Monetary Policy and AML Compliance. He may be contacted at rasheed.j.griffith AT gmail.com. You can also follow him on Twitter at @RasheedGriffith.

The views and opinions expressed herein are solely those of the guest author and are not necessarily representative of those of the Caribbean Trade Law & Development Blog.